Where Business, Tech and Innovation Collide in LA!

TECHSPO LA 2022 is a two day technology expo taking place June 16th to 17th, 2022 at the luxurious Loews Santa Monica Beach Hotel in Los Angeles, California in the heart of Silicon Beach. TECHSPO LA brings together developers, brands, marketers, technology providers, designers, innovators and evangelists looking to set the pace in our advanced world of technology. Exhibitors showcase the next generation of technology & innovation, including; Internet, Mobile, Adtech, Martech and SaaS technologies. Be prepared to be inspired, amazed and educated on how these evolving technologies will impact your business for the better.

As part of TECHSPO LA are two limited attendance conferences, DigiMarCon West 2022 Digital Marketing Conference (https://digimarconwest.com) and Sales Summit West (https://salessummitwest.com). If the conferences are where the learning, theory and inspiration happens, then the TECHSPO floor is where the testing, networking and product interaction takes place.

The TECHSPO floor is free to attend (for a limited time)! Register today! For more details visit https://techspola.com.

Southern California (or SoCal as it is sometimes called) is known for its mild and pleasant weather, especially the winters. The region is dry and mild. However, there is a difference in climate between the coastal region and the inland region.

The coastal region, streching from about Santa Barbara in the north to San Diego in the south and averaging no more than 35 miles eastward from the Pacific Ocean, is generally touted as having the most pleasant weather in the USA -outside of Hawaii that is. In this long but narrow strip, summer daytime highs are mostly comfortable, but with variations. For example, during the month of July, Santa Monica averages daytime highs of 75(F) while Los Angeles averages daytime highs of 84(F). There may be occasional heat spells thrown in, but the summers are generally pleasant never-the-less. During the winter, daytime highs are usually in the mid-60s(F) for the entire coastal region, with occassional low 70s(F) temperatures thrown in. Year-round outdoor activities can be enjoyed day or night on the coastal region due to the mild climate that is dominated by Mediterranean-type weather.

The large inland section (which generally begins about 35 miles inland from the coast and stretches all the way eastward to the Arizona and Nevada borders) enjoys mild daytime winter temperatures, but the winter nights are chillier than the coastal region. Summer highs in the inland portion can be extremely hot. For example, during the month of July, daytime temperatures in Rancho Cucamonga average 91(F). For Palm Springs the average is 108(F). Summer nights are generally pleasant in much of the inland region.

Most rain and fog comes between mid-November through the end of March for Southern California, and sunshine is a stable throughout much of the year. 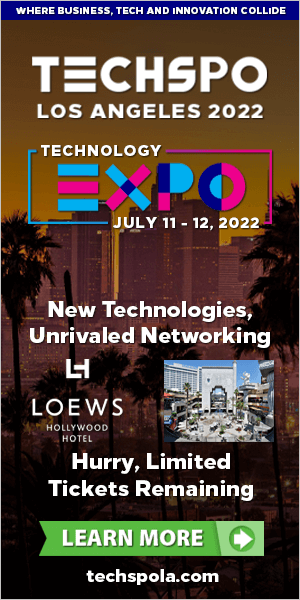 REGISTER NOW FOR YOUR PASS
To ensure attendees get the full benefit of an intimate expo,
we are only offering a limited number of passes.
Get My Pass Now!

Where Business, Tech and Innovation Collide